Each plant species has a specific set of environmental conditions under which it best grows.

Factors which affect plant growth include:

Over vast periods of time, those plants with specific features that allow them to live and reproduce in any set of environmental conditions survive, and other species die out. The plants found in that area are said to be adapted to that environment. All indigenous plants are adapted to low phosphate and nitrate soil conditions and most (except rainforest species) survive occasional fire (and often depend on it for regeneration).

The types of animals found in any area are related to the plants found there. Different animals feed on different parts of specific plants – shoots, fruit, seed – or on organisms (e.g. insects) that feed on the plants. Very few animals depend on only one type of plant for their food source. At different times of the year their diet varies to accommodate the growth or fruiting pattern of many plant species. Thus birds such as the Regent Bowerbird, which are normally found in the Sub-tropical Rainforest of Mt. Glorious, will sometimes be found in The Gap area (following gullies and creeks) searching for food. If one of the aims of the home gardener is to encourage wildlife into their garden, it is important to plan for plants that fruit and seed at different seasons.

Prior to European settlement the vegetation distribution of the greater Brisbane area was very different to that experienced today. Early nineteenth century explorers (John Oxley and Allan Cunningham) reported dense rainforests covering the slopes and mountains with towering wet eucalypt forests at their margins. Dry eucalypt forests and woodlands covered the drier slopes and alluvial plains whilst the banks of the rivers (Brisbane, Albert, Logan and Pine) were fringed by tall open forest and rainforest characterised by large, emergent Hoop Pines. As the rivers meandered to the coast the vegetation gave way to freshwater and estuarine wetlands. With the establishment of a penal colony and then free settlement in 1839, large scale deforestation occurred. Mangrove trees along the river banks were cut and burnt to produce ash for soap-making. Hoop pines, red cedar, silky oak, blackbeans and eucalypts from the wet forest zones were logged for commercial timber use. Vast tracts of lowland rainforest and eucalypt forest were cleared for agricultural use, and then to make way for the urban sprawl that accompanies population expansion.

In the almost two hundred years of European settlement of this area, two thirds of the woody vegetation of this area has been cleared. When agricultural land was allowed to regenerate (usually because that area could not sustain prolonged use), it reverted to open eucalypt forest. What is surprising is that although the overall vegetation characteristics of the area have changed dramatically, the species composition has not.

Different schemes are utilised to identify different type of habitats – some are based purely on the characteristics of the plants found in that area, or on the physical habitat and others on a combination of both factors. One of the beauties of home gardening is that it is possible to alter many of the physical attributes of the soil so that gardens can be established out of their natural habitat zone. Plants of coastal dunes can be grown successfully if planted in well mulched mounds to allow freer water drainage. Shale soils can be enriched with animal and plant compost so that Rainforest species can grow well given enough water. Although these trees may not reach the height they would in their natural environment, this is usually a benefit to the home gardener. Gypsum can be added to break down heavy clay soils. One of the unique features of the Brisbane area is that it falls within geological and climatic limits that can support many species from more tropical zones as well as southern, temperate zone species.

Heath vegetation is characterised by a large variety of shrubs, low grasses and creepers and sparse, stunted trees. All are adapted to poor soil conditions

Montane is a heath vegetation found on the tops of exposed mountains (e.g Mt. Sampson, Mt Barney and the Glasshouse Mountains) where the soil is sparse due to strong erosion and thus has little water retention. The large variety of plants found in these zones is aided by moisture gained from mists and low clouds in addition to rain, as well as a reduced evaporation rate due to the lower temperatures at the higher altitudes. Many species are unique to their specific mountain top since they are limited from interbreeding with similar species of other montane areas.

The Coastal Heath vegetation has similar species of plants to the montane but these are adapted to acidic, sandy soil low in nutrients but a constant supply of water. In Queensland this zone is often called Wallum after the indigenous name for Banksia aemula, a small tree common to drier areas of this zone.

All rainforests are found in high rainfall regions near the coast. They require fertile soils or soils in which there is a rapid rate of decomposition and recycling of nutrients. The trees grow close together and the upper leafy layer (the canopy) forms a cover which excludes light from the forest floor. The leaves of the large variety of trees are soft to touch compared to eucalypt leaves. All are fire intolerant but the Dry Rainforest and Gallery Rainforest are more susceptible due to their proximity to open forest areas and the topography in which they are found.

This forest displays a diversity of tree species (about 60) with their leafy canopies forming three distinct layers. Each layer, or strata, supports different organisms. For example, ringtail possums and sugar gliders feed on the flowers, fruit and leaves of the upper layer, whilst brushtail possums and marsupial mice are more likely to be found in the middle strata. Different bird species and butterflies are also found inhabiting different zones. Palms and strangler figs are common and many of the trees have plank-like buttressed roots that grow from the sides of the lower trunk. There is a rich undergrowth of large-leafed shrubs. Robust climbing vines and epiphytic ferns and orchid use the trees as support as they seek the light above the shaded forest floor which abounds in mosses and ferns.

In lower rainfall areas of the lower mountain slopes, pockets of dry rainforest can be found. There is lower species diversity in these forests and the trees are not as high and have smaller, harder leaves (to reduce water evaporation). These forests usually only have two canopy layers, lack palms and strangler figs and epiphytes, ferns and mosses are uncommon. The under-story, however, can form thick tangles of prickly vines and shrubs. In some areas these vines are so dense that they form Semi-evergreen Vine Forests.

Littoral rainforests are found close to the sea, often in deep, sandy swales between sand dunes where leaf litter acculumates and decomposes rapidly to provide nutrients for the plants . The number of different species is reduced as is the tree height compared with other rainforests and many of the species can tolerate some salt spray.

Open forest refers to the fact that the canopies of trees do not overlap as in the rainforest. The trees are characterised by having hard leaves (sclerophyll). In higher rainfall areas, usually at rainforest margins is found wet sclerophyll forest of predominantly towering eucalypts, with shrubs and ferns on the forest floor and broad-leafed creepers.

More characteristic of the Brisbane area are dry sclerophyll forests that are sustained in drier soils. There are generally two layers of plant growth in these forests. The main trees, forming the upper strata of vegetation, are eucalypts which are widely spaced and so allow light-loving grasses and small shrubs to grow at ground level. The middle strata and under-story are characterised by the wattles, of which there are wide variety in the greater Brisbane area.

In woodlands the trees are shorter and more scattered than in forests and thus the canopy is very open allowing grasses and shrubs to cover the ground.

As the name suggests, this is a habitat in which grasses predominate with few scattered and stunted trees. This zone is associated with a low, unevenly distributed annual rainfall.

Riparian vegetation is found along the banks of a body of water (river, stream or lake). These plants can withstand some water inundation and play a significant role in soil conservation, as biofilters (protecting the aquatic environment from excessive sedimentation and polluted surface run-off) and in maintaining good water quality. The trees found in these narrow zones form Gallery Rainforest and in the Enogerra catchment are characterised by Blackbean (Castanospermum australe) and the endemic Weeping Lillypilly (Waterhousia foribunda).

As the name suggests, the wetland habitat is one of predominantly water-logged top soil. Invariably a clay-pan forms in the sub-soil that prevents water drainage. As a consequence the organisms of this habitat must have adaptations that allow survival in these conditions. The water levels in this habitat vary considerably seasonally so the plants that are successful here can withstand a range of conditions from fast-flowing flooded currents to periods of dryness.

Two types of wetland exist in the greater Brisbane area – freshwater and tidal. 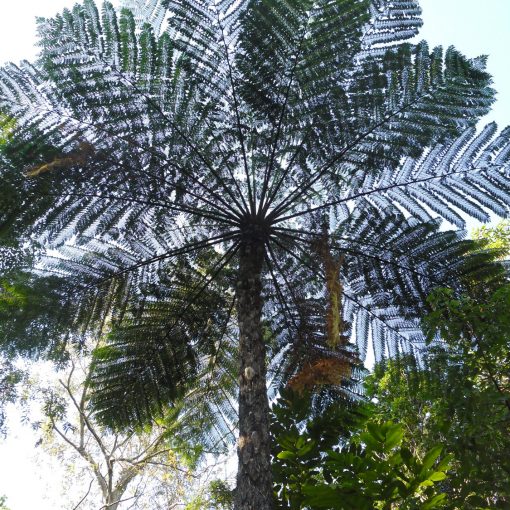 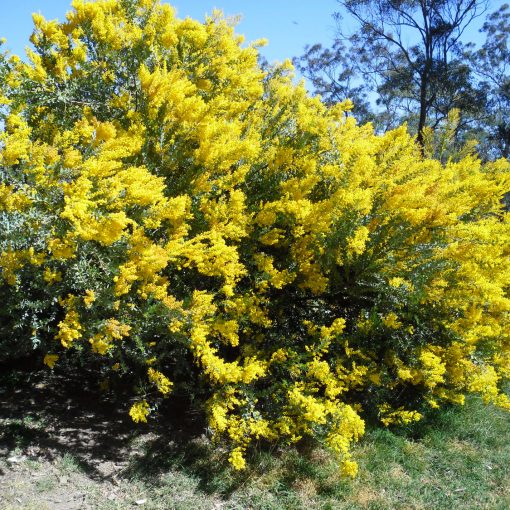 The knife-leaf wattle Wattles belong to the genus Acacia, of which there are 1350 species world-wide. An iconic part of the Australia […] 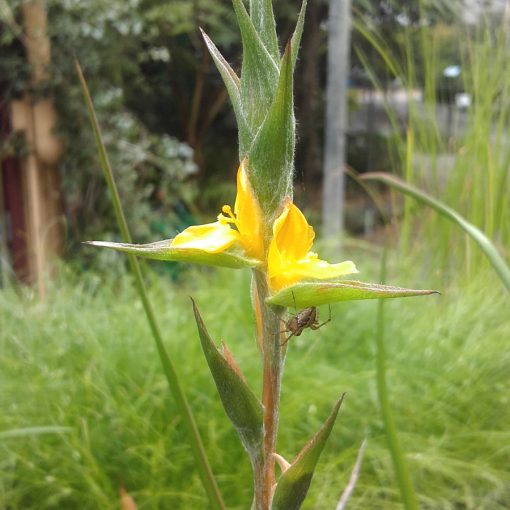 ‘Frog Hollows’ in the garden Frogs are an important part of the ecosystem and yet their numbers are dwindling. They are carnivorous […] 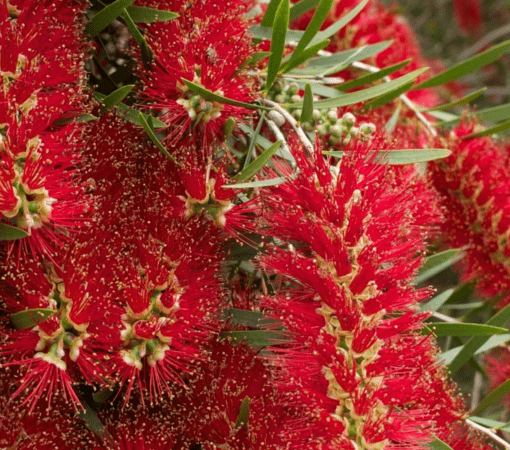